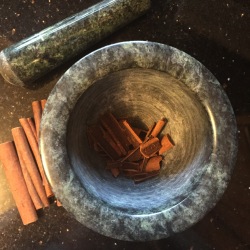 Crushing the spices gently will release their flavors.

My favorite drink, in my favorite mug. (Yes, it was a gift from a student. A favorite student, too.) 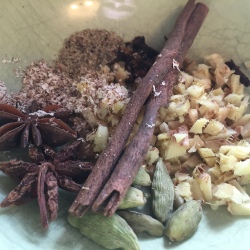 Mmmmm. Delicious and beautiful, too.

For the past several months, I’ve been in pursuit of the perfect home-brewed chai. Chai is a word that simply means “tea” in several languages, but what we usually mean in America is an India-inspired strongly brewed spiced black tea made with steamed or hot milk. In coffee shops it’s often called a chai latte (though you have to use caution when ordering, because some baristas think you mean a chai made with both spiced tea and espresso, also known as a dirty chai). Chai has been a favorite drink since my first taste back in my early college years, when I daringly tried something new to impress my crush.

Living in Alaska, I contented myself with daily chai made from the boxed Oregon Chai concentrate available at Costco and local grocery stores. It wasn’t a mind-blowingly delicious brew, but it was sufficient to tide me over till I could venture out to our nearest Kaladi Brothers cafe and enjoy an Alaska Chai or Zen Chai. Those are two amazing drinks brewed in Homer, Alaska by Homer Brewing Company. The Alaska (sweeter) and Zen (spicier) chais are clearly heaven-inspired. No other chai has even come close to their perfection of flavors.

Well, almost no other — for awhile, Starbucks’s new Oprah Chai from Teavanah was a fairly close second. For about a year while we lived here in Oregon after leaving Alaska, I was able to enjoy a chai brewed by someone else on occasion on visits to Starbucks. Then they changed the formulation, and now it tastes like it was brewed using cinnamon-flavored Red-Hot candies. Yuck. So that left me stranded in Oregon with an okay but not amazing morning drink, and no weekend rescue from mediocrity.

One day I was grouching about my plight to my husband, Aaron, and he said, “Why don’t you just make your own?”

Why not, indeed? I started comparing ingredient lists from the chais I drink most often. Then I found a recipe for chai concentrate online by “thecatnipcat”, at tastykitchen.com, that had a good overlap of ingredients from my favorites. Concentrate, by the way, refers to the strongly-brewed, spiced tea that you make ahead and store until you’re ready to add milk for your morning cup.

We made a visit to a specialty spice and tea shop, which had most of what I needed and also had storage tins and a rotating nutmeg grater — a long-held secret desire of mine. The spice shop was a delight of scent and beautifully arranged shelves, but I’ll be honest: all of the necessary spices can be found in the bulk section of your local grocery store, for somewhat lower prices. Here in the Portland, Oregon area, I get most of it at my local Fred Meyer, occasionally having to search New Seasons Market if something isn’t available there. I strongly recommend using whole spices that are as fresh as possible. They’re pretty affordable in bulk, and the whole spices retain their flavor much better than packaged ground ones.

Having collected my spices, I began brewing small batches. I started by exactly following the original recipe I had chosen. Then I began tweaking subsequent batches, one ingredient at a time.

Over the next few months, I made batch after batch until I had what is, to my tastebuds, an absolutely perfect blend of flavors.  Aaron agrees: it’s perfect. I know he would enjoy a little more fresh ginger than I use, but too much upsets my stomach, so I was forced to dial it back a bit. I compensated by upping the black pepper and cloves for the spiciness he prefers. (Spoiler alert: If you scroll all the way to the bottom of this post, you can see a nice concise version of my recipe. You’re welcome.)

The reason I’m enumerating all these small preference changes is to highlight the point that you don’t need to get hung up on a recipe. If you hate nutmeg and love ginger, adjust accordingly. If you think you might like an earthy hint of chocolate (I didn’t — that was a dud of a batch), try adding carob to the brew. I do recommend following a recipe scrupulously the first time, though. Then, if you find it’s not exactly what you want, you can experiment by making just one or two changes at a time on subsequent batches.

However: I have it on good authority that this chai is perfect just the way it is. Twice I’ve brought my good friend Gini (who mentored our family through our very first ever trick-or-treating experience and has joined me in periodic sanity-rescuing play dates for our similarly-aged kids) a bag of the dry ingredients and instructions for brewing. And I don’t mind boasting: she raved about it. Then she shared some with a friend, who also waxed enthusiastic. That was the ego boost I needed, the final confirmation that yes, this is a GOOD CHAI.

So: First you’ll need sixteen teabags of plain black tea per batch (the traditional method involves loose-leaf, but in this case I’m happy to simplify). I get the three-packs of Lipton at Costco — I use tea a lot, especially in the summer, between regular batches of iced tea and chai. You’ll also need red rooibos tea, three bags per batch. (It’s an herbal tea from an African shrub, and it’s pronounced roy-bose.) Try to find an unflavored version, but if you can’t, a vanilla red rooibos will have less negative impact on your brew’s flavor than a chai rooibos.  Celestial Seasonings has a vanilla red rooibos. The plain red rooibos currently in my pantry is Fred Meyer’s store brand, for fellow West Coasters. I find it in the coffee and tea aisle in the grocery store.

Spices: Seven whole cardamom pods, fifteen cloves, three star anise, three cinnamon sticks. You can gently crush these with a mortar and pestle to help release their flavor, though it isn’t really necessary — but I can promise you that it is really, really fun. Black pepper, fresh or pre-ground, 1/4 teaspoon (if you have whole, you’ll grind them before you add them). Nutmeg, 1/2 teaspoon. Fresh ginger, chopped, grated, pounded, or whatever is your favorite method of preparing it: 1 tablespoon chopped, which turns out to be 3/4 ounce. If you can’t find fresh ginger or run out unexpectedly, you can use about a teaspoon of powdered  ginger — it won’t add as much fresh flavor or heat, but it’s definitely better than leaving it out. Orange zest (clementine or mandarin will work just fine, too), one teaspoon or more — I often just use the entire orange’s zest with no ill effects. Zest the orange by rubbing the washed orange firmly over the smallest grater teeth, if you don’t have a zester — covering the grater with waxed paper will help you free the zest when you’re done. I’ve used about three drops of orange essential oil a few times when I didn’t have an orange handy, too, though you have to be careful not to overdo it.

Crushing the spices gently will release their flavors. 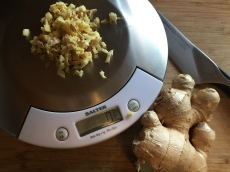 Mmmmm. Delicious and beautiful, too.

This brew smells too good to believe.

Boil ten cups of water in a covered saucepan. Once it’s boiled, turn the heat off but leave the pan on the burner. Add 3/4 cup of brown sugar, 1/3 cup of honey, the teabags, the assembled spices, and two tablespoons of vanilla extract. Cover the pan again and let it steep for twenty minutes. Enjoy the heavenly aroma as your house fills with the tantalizing scent of freshly-brewed chai. A small note: you can get away with using twelve cups of water if you want to make it stretch a little, but in that case I recommend brewing it just a little longer, and it still won’t have exactly the same flavor.

After twenty minutes, pull out the teabags — they’re compostable, by the way, if you’re into composting. Don’t squeeze the bags, or your chai will be bitter. Just let them hang over the pan for a few seconds to drip. Strain the chai into jars for storage, and yes, you can compost the spices too. I put a small strainer into a wide funnel to make pouring without spilling easier. This batch will fill two quart jars plus a half-filled mug to drink now, with sometimes a little extra that you’ll need to put into a small jar or share with someone. I know this vagueness is irritating the mathematically minded readers: ten cups of water going into the pan ought to equal ten cups of chai concentrate going into the jars, right? No. Some of the water will evaporate when it heats and boils, even with a lid, and especially if you didn’t listen to me and didn’t bother covering it. And the teabags will absorb some of the liquid, too. 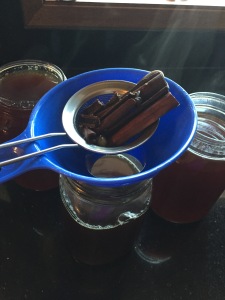 You can enjoy the chai several ways. The easiest way, and the method I usually use, is to fill a mug halfway full of chai concentrate, then top it off with milk, and microwave it. You could also start with a mug filled halfway, microwave it (for a shorter amount of time), and top it off with steamed milk — yummier and more fun to drink, but more time consuming…and of course it requires having an espresso machine or milk foamer. Finally, you could drink it cold: fill a glass half full of concentrate and the rest of the way up with cold milk. Oh, and of course you could use it to make a citrus chai spritzer. You might find you want it a bit sweeter for the spritzer — just add a bit of honey or simple syrup.

I’m not exaggerating when I say that I put months of work into this perfect chai brew — but trust me, I won’t be offended if even my best friend confesses to altering the recipe a bit. That’s part of the joy of making this kind of thing at home. Brew away, change it however you want, and feel free to share this truly magnificent and amazing recipe with permission to adapt as needed. Enjoy!