Sparkling beaded garland stretches around a green tree, white lights are sprinkled across the green branches, while the shimmer and glitter of painted-glass ornaments catch and reflect the glow. Under the tree is a red-and-copper tree skirt I sewed several years ago when the perfect tree skirt refused to appear in shops. On the table, ornament-shaped candle holders dusted with gold and red glitter rest atop my grandmother’s hand-woven table runner next to tiny vases filled with wintry twigs and berries. A gold paper star in the window, lit from within by an electric tea light, sends out a gentle glow. Brightly-decorated nutcracker soldiers guard the fireplace, while a jolly ceramic snowman stays safe from a curious baby behind the sturdy iron screen. High on a shelf, a silver Advent calendar is ready to count down to Christmas. A tall Santa in stately robes presides over the living room’s festivities from the next shelf. Down below, a winter village has escaped from the pages of Charles Dickens’s books, the windows and street lights gleaming convincingly. Cheery colored lights embrace the front windows and the edge of the roof. Our favorite carols flow through the air. A baby’s dimpled hand stretches cautiously toward the twinkling lights, eyes wide with wonder, turning toward us for reassurance. A small boy dances around the room, pausing periodically to inspect the new finery. Talk of gifts and cards, wrapping paper and ribbon, and a chance of snow next week, all twine through the air, merging with sparkle and glow to form an unmistakable feeling: the holiday season is upon us. 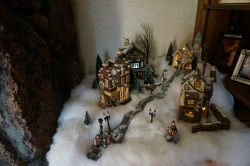 Straight from the pages of Charles Dickens’ books.

I love the faded color of the lights on this vine maple tree.

I’ve only been celebrating Christmas for about twelve or thirteen years, so the candles and lights and music feel new and exciting to me, too. I don’t stare and dance like my children, but I revel in the explosion of holiday decor all the same.

I grew up in a peaceful, prayerful commune that was strictly nonobservant of all holidays — well, except for Thanksgiving. Christmas wasn’t as bad as Halloween, the devil’s day, but we still regarded Christmas celebrants with a certain amount of sorrow and pity. We pitied all those foolish people who’d never figured out that Jesus was born at harvest time, not in the middle of winter. We felt a certain scorn for those who didn’t know that the season was a continuation of Druidic and Pagan and Roman holidays, all in celebration of other gods. And hadn’t anyone pointed out to them that Santa is an anagram of Satan?

It never occurred to me that people might simply not care about all those valuable facts.

People crave light and color, especially green, in midwinter. It’s especially notable in northern climates, where winter is dull and grey. The shortness of those monochrome days does something to the psyche. And the month or so leading up to the Winter Solstice is the perfect time to push back at the darkness. People like to claim that “Jesus is the reason for the season,” but if that were really the case, we’d be celebrating in October-ish and our motifs would be straw, tiny babies, and pregnant mothers; not glittering lights and shining gold and silver. Solstice has been celebrated for millennia; Christmas is a newcomer to the scene. The darkness, my friends, is the reason for the season. Darkness, and a craving for light. And there’s no shame in admitting that.

I remember the winter my mom’s best friend got (re)married. She has been like a second mother to me, and her generous spirit makes her well loved in the trio of communes where I lived. We wanted her wedding to be perfect. A winter wedding was uncommon, so we had no season-appropriate decorations ready to be reused, no fresh flowers to brighten the rooms. Someone had the bright idea to twine green garland and white twinkle lights around the stairway banister in the main house on our farm. “But won’t that seem a little… Christmassy?” someone worried. Everyone considered the problem for a moment. As one, we all silently decided: we didn’t care. The garland and lights went up, not just on the banister, but on the front porch rail as well. The following year, those decorations quietly appeared again in November. And again the year after that. No one called them Christmas lights. No one even mentioned them. But our winter-starved eyes drank in the glow and the green, like stranded desert travelers bask in the cool of an oasis.

These days, long after my departure from the farms, everyone is a bit more relaxed about the holiday. They have a big Christmas dinner with lots of visitors from the village. Some families put up trees and even share gifts. You can occasionally hear Christmas carols, maybe even in the church service. You could look around a living room on Christmas Eve and never know you were on a highly conservative religious commune. It’s almost…normal. It doesn’t surprise me. That first garland meant that full-blown Christmas was an inevitable eventuality. Once you experience the lifting of the spirits that comes with the lights and glitter, it’s hard to go back.

As I look around my cozy living room, at my little ones awed and delighted by the new festive decorations, I feel the reassurance that back home, they’re doing the some of the same things. It’s a connection that is strangely meaningful to me — strange, that is, considering how far removed my life now is from what it was. I guess it’s a little personal sign that says: It’s okay. No matter how far you go, you’ll always be connected; this will always be home. And there it is. Connection: the second “reason for the season.” The sense that we are together, even when we’re apart. That our love doesn’t have to grow thin as the physical distance stretches between us. Family is family, and always will be.

All decked out with shiny, rattly finery. Distraction from the tree: accomplished!

Helping with the roof lights 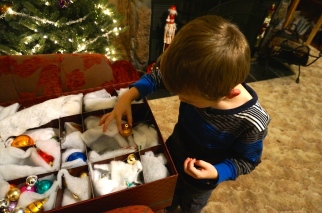 This year, I actually let him put ornaments on the tree.

This year, I actually let him put ornaments on the tree.

What’s behind this door?

7 thoughts on “Most Wonderful Time: Christmas Past and Present”