Today is overcast. It’s maybe the second or third overcast day we’ve had this summer, and it’s a pleasant break from the heat here in the Portland, Oregon area. Besides being refreshing, an overcast day is perfect for capturing photos. I’m not an experienced photographer, but I have learned that much. The colors are vivid and details clearer than on a bright, sunny day.

So, with the kids playing peacefully with their new-to-us basketball hoop in the driveway (thanks to our neighbors’ decision to clean out the leftovers of their now-grown son’s childhood), I wandered across the yard to take a closer look at some bull thistles growing against the fence near our raspberries. They’re on the far side of the fence, in a neighbor’s hay field, making them near-impossible to uproot. But they are beautiful nonetheless, if I set aside mild concern for the wellbeing of our raspberries. 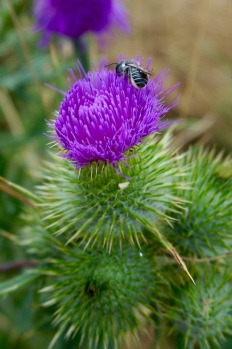 Bee on a thistle

I snapped a few photos with the camera, and was ready to move on to meander through the flower beds looking for photogenic subjects. As I turned to leave, a flash of brilliant color caught my eye. I leaned in for a closer look. It was an insect. Bee-shaped and bee-sized. Acting bee-like as well, burrowing down into the flower in search of nectar and pollen. But this bee was a vivid, iridescent green usually reserved for exotic tropical creatures and hummingbirds.

Of course, I aimed the camera. I got in two clicks before the bee darted off. Naturally, both shots were so blurry that the insect was indistinguishable. But now I’m on the hunt. I’m going to be stalking that thistle, waiting for that bee to return so I can capture it on camera.  I looked it up and learned that it’s a halictid bee, probably in the genus agapostemon. Here’s a beautiful specimen not, alas, photographed by me. I took it from the site CirrusImage.com, which has detailed information about insects and spiders.

Oh, and the peacefully-playing kids? That axiom “Silence is golden, unless you have a toddler…then silence is very, very suspicious” is one I have never managed to take to heart no matter how many times it’s proven to be true. Here’s what my quiet kids were doing while I was happily snapping photos: