Lately, the kids and  I have been going for an occasional walk down the road to the field in which Niko’s favorite cow, Suzy, lives. Of course, Suzy isn’t her name. That is to say, it easily could be, but as far as I know, the cow was nameless before we encountered her.

It was Christmas, and Aaron’s parents were here for a visit. We’d walked down that road for the first time that day. It’s a winding country road with no shoulder, and until that day I’d never walked it in the eight months we’d lived here. Despite the lack of paved shoulder space it turned out to be a pleasant walk. We walked about half a mile, until we ended up next to a pasture with three young heifers.

Niko started life as a city boy, and he’s been a bit unsure about cows, especially since last summer when a  startled young steer trampled a barbed wire fence and got stranded in our yard. Frightened by its unfamiliar environment, made anxious by its separation from its buddy on the other side of the fence, and in pain from a barbed-wire gash, the steer abandoned its formerly gentle nature and gave way to panic. It marauded about, lowering and shaking its head, pawing the ground,  trampling the grape vine, devouring the lettuce, and bellowing. Neighbors and the animal’s owners helped return it to its field, but after that Niko was a bit nervous about our bovine neighbors. 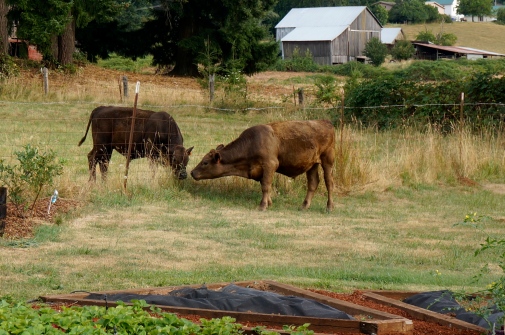 But in this new field there was a small, pretty, brown-and-white cow with gentle eyes. Niko’s eyes widened as he looked at her. He stared long and hard. Then, with no precedent at all that I know of, he lifted his hands to his mouth and began to moo. To our astonishment, that little cow lifted her head, uttered a long moo in return, and walked directly to him. 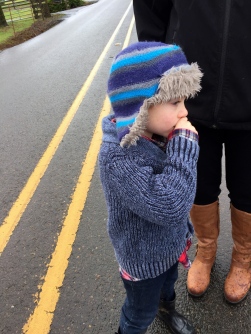 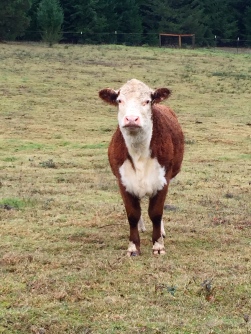 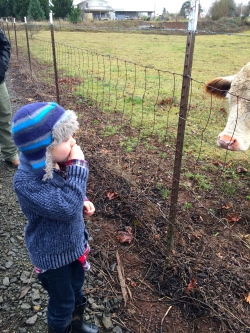 Of course, then he didn’t know what to do. Even a young heifer is pretty big next to a four-year-old, and despite his pleasure at her response, he was a bit intimidated. His grandma, Kay, tried to encourage him to stroke her nose through the fence, but the slime streaming from it was a bit of a deterrent. Still, love is not love which alters when it alteration finds, and despite Niko’s disgust, he clearly loved this cow. His eyes rested on her with adoration, and it took some convincing to get him to leave her when the time came to walk home. She was distraught as well, stretching her neck out and mooing as we walked away. “Goodbye, Suzy!” called Kay, and Niko echoed, “Bye, Suzy!”

Now, every time we drive by that field, Niko waves to Suzy, and each time we walk that way, she ambles over to greet us. Niko still avoids the slimy nose, but still gazes adoringly at her. And every time, we call, “Goodbye, Suzy!” as we leave.

It’s nice to have a friend, even of the bovine ilk.