This last summer and fall, Aaron started experimenting with home brewing. He created a cherry wheat Hefeweizen that’s better than anything similar I’ve had yet, using cherries from our tree. He made an apple and a pear ale that both turned out to be very high in alcohol and low in carbonation, more like a wine than an ale, but are delicious despite being not what we expected. And he’s made three batches of root beer.

I didn’t know this before Aaron got interested in brewing, but the distinctive flavor in root beer is wintergreen leaf. When we learned this, we went out and got a couple of different traditionally-brewed root beers and sipped slowly, exploring the flavors — and yes, you really can taste it. However, when Aaron collected ingredients for his first batch of root beer, the brewing supply store didn’t have wintergreen leaf. They did have spearmint. He couldn’t remember for sure which leaf he was supposed to get, saw the spearmint, and decided it must be the right thing. The result was oddly delicious. Not really root beer, but an earthy, slightly herbal, dark-colored brew. It was REALLY GOOD. The brewing supply store still didn’t have wintergreen the second or third times he wanted to make root beer, so he just used spearmint again, knowing it would turn out to be good (though not exactly what one might expect from something called root beer).

Meanwhile, I was learning about wintergreen, trying to find a reliable source so we could try a batch of more traditionally flavored root beer. You can order dried leaves through Amazon, as well as seeds. I thought planting our own might be a good idea. They’re pretty plants, with shiny evergreen leaves and pretty white flowers in spring. The flowers give way to white berries later in summer, and then the berries ripen to bright red in the winter. Planting the seeds can be a bit tricky, as wintergreen is a cool-weather plant. You have to refrigerate the seeds before germinating them, and then you have to sprout them in a wet paper towel before planting. (I got my information at Heirloom Organics and Mother Earth Living.) It sounded a bit daunting, but I was prepared to try.

And then, sometime before Christmas, we were strolling through the little floral and garden section of a nearby New Season’s Market (a charming grocery store chain that originated in the Portland area), and saw… wintergreen! They were attractive little plants in terra cotta pots, and the plant marker confirmed what I’d read: they’re good ground cover, prefer acidic soil, like to be in partly shaded places. Aha! So much easier than planting from seed!

So we’ve had two little wintergreen plants sitting on our porch for a month and a half, waiting for me to decide where to put them. Finally, yesterday, I decided I needed to take care of them before they became hopelessly root bound. I did one more spurt of research and discovered the key: they need sun in morning and shade in the afternoon, and they need to be kept moist when they’re young. Right away I knew where they needed to go.

There’s a vine maple at the end of our larger pond that is perfectly positioned so the rising sun shines at its base. That spot gets light all morning until the sun is high, when the dense leaves of the little maple provide shade. The garden is set up with a sprinkler system, so it’s easy to keep the ground moist, and that area also gets watered when I water the vegetable garden. Perfect.

Yesterday afternoon, I went out with kids and puppy in tow and did some preliminary weed-pulling, then plopped the plants into the ground. With any luck, within a year or two they’ll spread and multiply to the point that we’ll be able to harvest some leaves now and then. Meanwhile, they’ll become more and more decorative as they grow, which is a nice side benefit.

Niko was delighted that Sofia joined him in the weed-collecting wagon for a ride. She didn’t last long before she was ready to go off on her own again! 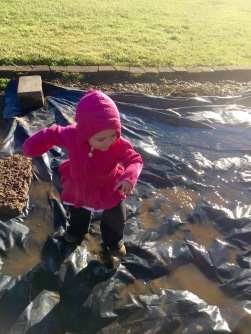 I took too long pulling one stubborn weed, and of course she found some lovely puddles. 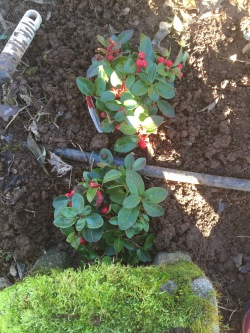 Planted and ready to start their job as ground cover and root beer flavor.